Damond Young is a recording artist, lyricist, producer, and entrepreneur based out of New Orleans, Louisiana, USA. Known for his uniqe brand of youthful, explosive energy lyrical versatility, creative wit, and spirituality, Damond has quickly gone from surprise prodigy to industry prospect, to now becoming one of the most exciting independent acts to emerge in New Orleans and add to the historic legacy of innovators that have made New Orleans’ musical tradition a thing of legend in hip hop and beyond.

Born and raised in New Orleans, Damond grew up all across the city, from the 7th Ward, St. Bernard, and New Orleans East to the esteemed areas of Fontainebleau, Uptown, and Tulane University, bringing a wide range of experiences into his music.

Damond’s recording career officially began at age 13, when he was inspired by family members beatboxing and beating on tables in the tradition admired by hip hoppers worldwide. As he began writing and articulating his thoughts in a complex world he interpreted through music, everything from New Orleans’ second line jazz tradition to the world famous Cash Money and No Limit Records inspired him.

In the wake of Hurricane Katrina, Damond emerged as a rising MC in New Orleans, pressing his first release with long-time compatriots Skitz and Flow. HOW 2 GRIND VOL. 2 quickly took the city by storm in 2008, and established DY as a presence in the New Orleans landscape among rising stars.

DY then released his first solo mixtape—No Bargains—in 2009, establishing the powerful blueprint from which he continues to evolve today: a versatile flow with universal appeal, and carefully crafted thoughts served with passion and spiritual power. No Bargains also included collaborations from New Orleans fixtures Skitz and Flow, and 5 Star and The Show as well.

He returned the following year with Freestyle Sessions, another full-length mixtape, and began to garner new attention for his relentless lyrical output and continued departure from mainstream rap, this time paying homage to his contemporaries in the game. He made his first live radio appearance at Q93 in New Orleans, freestyling over an array of beats spun by New Orleans legend Wild Wayne, then going on tour to open for New Orleans alternative hip-hop rock duo The Knux.

In 2014 he released his debut album, Ahead Of Time (available on iTunes, Spotify, Apple Music, Tidal, and more) under the name Damond Young, establishing the eclectic, inspired, well-rounded insights and vibrations that are now synonymous with his brand. The video for its lead single, Stares & Whispers, has gone to see over 300,000 views on YouTube. 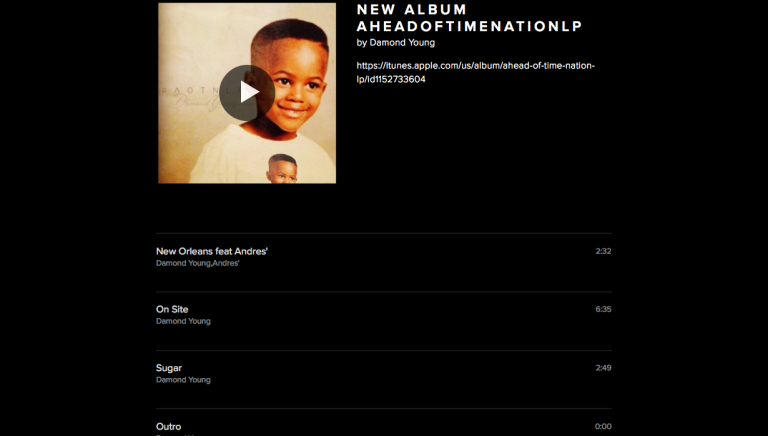 Damond’s flow is melodic and suited for the masses, but he’s never applied himself exclusively towards the club. Instead, he opts for tracks that give him space to reflect and grow from lessons learned from a misspent youth, visions of the life he dreams of, and the journey of an independent artist.

While determination and drive remain strong in his lyrics, Damond never sounds weary on his road to greatness, and his accomplishments so far reflect this. With no record deal or benefactor, Damond has already released 3 full-length mixtapes and 1 studio album, with another mixtape, studio album, and regional tour currently in development.

DamondYoung.com next @RocNation artist just drop Turn Up hit million plays now he back with IAMDOGBACKWARDS